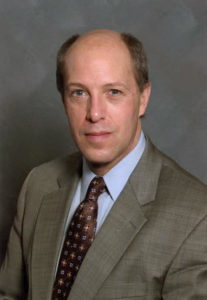 We focus on serving the area with the utmost levels of integrity and commitment.

David began practicing law in Pontiac, Illinois September of 1987. He opened his solo practice in January of 1997. David and his staff strive to help his clients get the best resolution for whatever issue they may have and to assure that they understand the process, the issues, and their options so they actively participate in determining the result.

David and his wife have been married since 1989 and have raised their four children in Pontiac. When David is not in the office, he can be found spending as much time as possible with his family and at his children’s different events. He also has a passion for collegiate sports and attends several throughout the year.

David has served as volunteer, board member, treasurer and president of the Boys and Girls Club, a member of the Pontiac Township High School handbook committee, a Chamber of Commerce member, and for the past several years as a Bible Study Fellowship group leader. David is a member of the American Bar Association, the Illinois Bar Association, and the Livingston County Bar Association. He maintains membership in the family law, civil procedure and litigation, and small practice committees. He is licensed to practice in all Illinois state courts, federal district courts for the central district of Illinois, and the U. S. Tax Court.